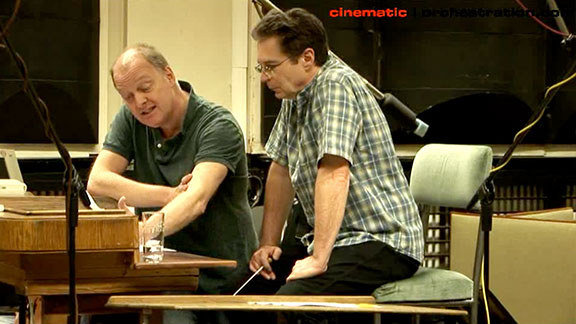 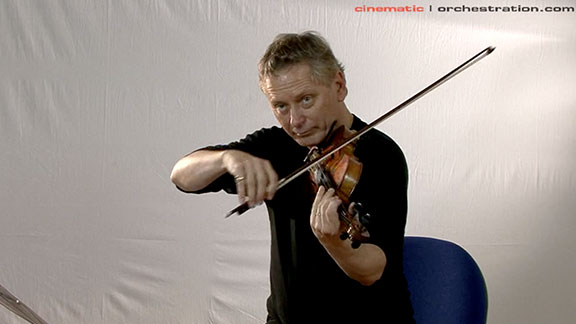 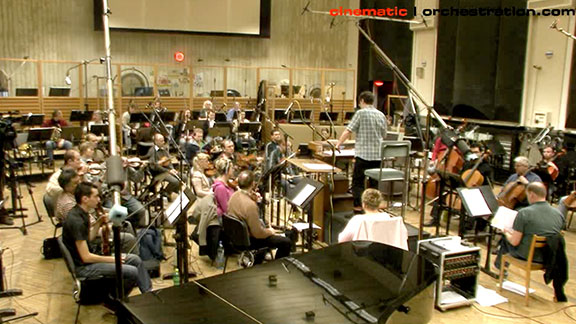 Learn how to orchestrate for film, television or games using either samples or live players. Taught by top Hollywood composers and orchestrators, this course will show you how to produce epic and inspiring orchestral film scores using the techniques developed by the film and television industry. This online course gives you a comprehensive training in sampled orchestration, and over 30 hours of in-depth tutorials with some of the world’s leading session musicians, orchestrators and composers.

Learn how to create vivid and life-like orchestral mockups, how to use orchestral templates, and make informed choices about your choice of samples. Discover how each section of the orchestra works from film session players from movies like Batman Begins and Star Wars. Practice professional techniques used for creating scores that session musicians can play easily, allowing you to write more idiomatically for their instruments and save time during recording sessions.

The thing that was most appealing to me was that the people designing to courses were actually working composers.

There's always something to learn... I've gone on to done a bunch of films, documentaries, animation, and my first feature last year. It's been very exciting, and these are always a reference for me to go back to.

An Introduction To Cinematic Orchestration
Introducing our live orchestra, different approaches to sampled and live scoring and workflow, take-downs, and how to orchestrate from audio files.
String 1: Instrument Guide
Top session musicians who played on Iron Man, Kung Fu Panda, The Chronicles Of Narnia, Madagascar 2, Gladiator, Dark Knight and hundreds more, explain how to write for their instruments.
String 2: Composing Techniques
James Bond orchestrator Nic Raine arranges a piece from scratch in Sibelius, then records his work with our own live string orchestra. Guy Michelmore gives you a detailed look at creating realistic sampled string arrangements.
Woodwind 1: Instrument Guide
Learn about individual woodwind instruments and how to write for them with session player, Jamie Talbot. How to produce a convincing sampled woodwind section and the library choices available to you.
Woodwind 2: Composing Techniques
Course orchestrator, Nic Raine, arranges a piece for woodwind and strings, then records his work with our live orchestra. There’s also a real-time sampled scoring demonstration of writing for woodwind and strings with Guy Michelmore.
Brass 1: Instrument Guide
Take a detailed look at the ranges, articulations, strengths and weaknesses of the individual brass instruments, with session players with credits from Harry Potter to The Dark Knight.
Brass 2: Composing Techniques
Brass writing tips and tricks, plus an exclusive master class in swing band writing with prolific arranger, Steve Sidwell. We arrange a piece from scratch and then record it with our live orchestra. Finally a real-time scoring demonstration of writing for sampled brass with Guy Michelmore.
Writing For Harp And Percussion
This unit looks at the highly technical area of writing for both harp and percussion. We will then show you how to create a percussion track with samples and real-time scoring demonstrations.
Writing For Small Orchestra
Bring it all together with specific techniques and considerations for getting the most out of smaller orchestras and ensembles, including a bar-by-bar analysis of The Snowman with the composer, Howard Blake.
Writing For Large Orchestra
A bar-by-bar analysis of the main title tracks of Star Wars with Hollywood orchestrator and composer, Charles Fernandez, followed by live orchestration demonstrations from piano score to final recording of film cues in different styles with Nic Raine. Conclude with a detailed guide on how to create epic orchestral sounds just by using samples.
Working With Live Musicians
Learn how to take a MIDI demo and turn it into a performable piece of music. We will also explore the many things you need to know about preparing scores, parts, backing tracks, click tracks, running orders, mix minuses, Pro Tools sessions, and more.
Bonus 1: The Complete Guide To Sampled Orchestration
Everything you need to know about how sampling works - the technology, the libraries and the developers. Learn how to use multiple articulations and controllers, MIDI performance techniques, how to overcome various sample limitations to achieve a realistic sound, plus more. Also included are video interviews from Vienna and LA with the men behind both VSL and the EWQL libraries.
Bonus 2: String Fingering & Playability Charts
Avoid writing unplayable string parts with our detailed fingering charts for each of the different string instruments.
- Try before you buy -

Cinematic Orchestration has been created by working professional composers and orchestrators. Watch Nick Raine (Book Thief, Goldeneye 007, Empire Total War), Bill Boston (Cloudy with a Chance of Meatballs) Charles Fernandez (007 Spectre Trailer) and many more showing you how to do what they do best.

We take you right inside the world of the commercial orchestrator and composer to give you the inside information to bring your career to life.
See All Teaching Staff

I’ve found that the Cinematic Orchestration course has guided and encouraged me to dissect every characteristic of individual instruments in detail and then to use them to their full potential.

If you're thinking about taking the course, there are some requirements you may want to consider. Here are the most frequently asked student questions to help you to assess whether the courses is right for you.
This is not an entry level course. Most students have at least 12 months experience of making music. For most of our courses you do not need to read or write music but you do need to be able to create a piece of music and record it with reasonable fluency. For Cinematic Orchestration, you do need musical literacy to ABRSM Grade 5 or equivalent standard.
Yes. If your internet connection is not particularly stable, you do have the option of downloading the course materials for offline viewing. We are unable to send out physical copies of our course text and videos.
The latest Digital Audio Workstation (DAW) capable of importing video files. We would recommend:

Sample libraries are a must-have for the course. There are countless libraries to choose from, many of them capable of high-quality demos. Here are some sample library suppliers that we recommend but there are many more:

Here is a possible selection that we recommend but there are many more:

East West Quantum Leap – Symphonic Orchestra Gold
VSL Special Edition
8Dio – Adagietto
Heavyocity – Damage
Soundiron – Emotional Piano
You will need a machine capable of handling sampled instruments and video simultaneously. We recommend at least a quad-core computer with 16GBs of RAM. The techniques are still transferable to any modern machine. As long as your processor is up to scratch, your only limit to how many instruments you can load is how much RAM you have installed.

We also recommend a MIDI keyboard, as well as monitoring headphones or speakers.
The video materials total over 30 hours, and you can watch them in whatever sitting suits you best.
Downloadable course materials are only enabled after the money-back guarantee has either been waived or expired (30 days after purchase).
Interested? 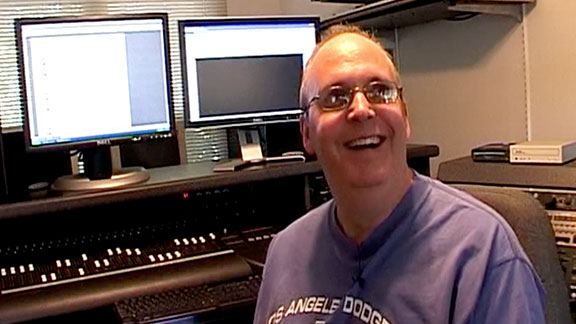 Nic Raine had a special collaborative relationship with John Barry. The two worked together for twenty years on many films scores, including two Bond movies (A View to a Kill and The Living Daylights), Enigma and on John’s highly acclaimed album The Beyondness of Things.

Nic Raine has worked with artists in the popular music sphere too, having arranged tracks for Maire Brennan (Clannard), Duran Duran, Aha, B.A. Robertson, Desree and Texas. He also orchestrated the Liverpool Oratorio for Carl Davis and Paul McCartney.

Nic has orchestrated the music for video games including Primal, Medievil II and Viva Pinata I and II. Collaborating with Kevin Kiner, he orchestrated the Lucasfilm animated Star Wars picture Clone Wars.

Additionally, he has written a number of works for concert performance including pieces for various small chamber ensembles, chamber orchestra, wind ensemble, concert band and percussion solo. Bill was a 1994 recipient of the BMI Pete Carpenter Memorial Fellowship, which included a seven-week internship with television music composer Mike Post.

“What Guy has established/maintained here is something quite remarkable and unique, with he, Tim, Bradley, TSE staff and tutors all working toward a singular, focused goal, namely, to equip the dedicated TSE student with the tools he/she needs to succeed as a working commercial music professional. To say that I wished I had this type of musical training available to me when I was starting out would be the understatement of the century.”

Charles Fernandez is an Emmy and Annie Nominated composer, as well as an orchestrator, bassoonist, educator and conductor, who has been working in Los Angeles since 1983. He has composed for television series’ such as Disney's Little Mermaid, Disney's Aladdin, Universal's Casper Cartoon Series (for which he  received two Emmy and one Annie Nomination), Disney's Doug,  Disney's 101 Dalmatians, DreamWorks' Toonsylvania, Disney's Bonkers  and Adult Swim's Robot Chicken.

Among films he's written for are Doug's 1st Movie, Aladdin III, The Pebble and the Penguin, All Dog's Go To Heaven II, Aladdin and the King of Thieves, All Dogs Christmas Carol, Babes in Toyland, Tom Sawyer, Alvin and the Chipmunks Meet Frankenstein, The New Adventures of Tom Thumb and Thumbelina, Jingle Bells and The Tangerine Bear.

As a teacher, he’s an instructor at LACSHA (Los Angeles County High School of the Arts), UCLA Extension and for ThinkSpace Education, based in the UK.   His recent concert premieres include: Frolic Concertino for Tuba and Concert Band, Persepolis Bazaar for Concert Band, Holiday Horn Concerto for Horn and Band/Orchestra, For the Matadors for the 50th anniversary of CSUN, Americana Trio for Flute, Clarinet and Bassoon, Cruise and Star for Saxophone Sextet and Harp, and the latest commission for Dr Larry Stoffel and CSUN, Bachus Illatus for Band and Organ for the Los Angeles Bach Festival.   He’s also served as orchestrator and conductor on countless trailers and film projects, the most recent of which was the trailer for the James Bond film Spectre.

Guy Michelmore is a multi award-winning film, games and television composer whose clients include Marvel, Disney, Dreamworks, Lionsgate and dozens of major TV networks around the world. He’s best known for his work with Marvel on eight animated feature films including Ultimate Avengers and Thor, as well as hundreds of episodes of television including Avengers: Earth’s Mightiest Heroes, Iron Man: Armoured Adventures, Hulk and many more. His unique and accessible style opens up the whole process of writing music in a way that has seldom been done before.