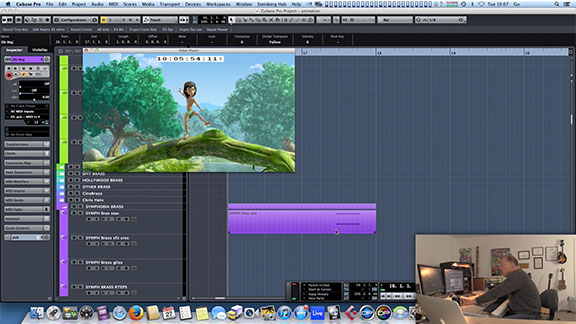 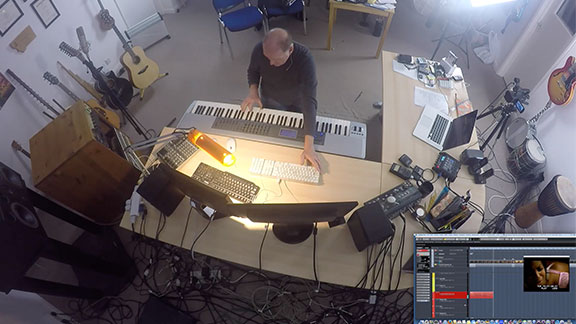 Music For The Media

Music For The Media is an intensive course in film scoring that covers both the technical and creative aspects of writing film soundtracks, scoring TV shows and much more. Written and presented by award-winning composers, the course takes you from spotting and synching your music to picture, through to composing for feature films and delivering your work to clients. This course will help you develop your career as a film or TV composer.

Learn everything you need to know to make money with your music in the film, games, and television industries. Watch interviews with real working professionals, giving you contemporary industry advice from professionals right at the heart of the industry. We also give you real-world challenges to motivate you to take action.

1. Welcome & Professional Skills
In this unit, we’ll take you through the basics of the course and some workflow techniques to speed up your writing.
2. Corporate Video
Composing for a corporate video is a likely place for most of you to start your careers, so we give you all the inside information on what they’ll want and how to deliver.
3. TV Themes & Tune Writing
Writing a good tune can be difficult, but in this unit, we show you just how simple it can be. With some guidance from top professionals, you’ll be writing a catchy tune in no time.
4. Library Music & The Importance of Originality
Lots of musicians struggle with originality, hence why lots of companies now go to library music companies for music. In this unit, you’ll be shown how to stay original, and how to write for libraries.
5. Trailers & Production
Trailers. No successful film is ever without one, and they almost always need music. Unit 5 takes you through the role music plays in trailers, and you’ll see how trailer tracks are constructed for maximum impact and effectiveness.
6. Video Game Music
Music for video games is one of the largest and fastest-growing markets in recent years. Unit 6 will get you up to speed with current gaming needs and how music is made to fit linearly and interactively within games.
7. Writing To Picture
How it works, how to do it, the common mistakes and pitfalls for the unwary.
8. Wildlife Documentaries
Writing music for documentaries and nature films. Reaching beyond the technical aspects of writing to picture into the more challenging creative considerations.
9. Working With Animation
How to write really close synched music, sync to lots of hit points, and how to read the picture effectively.
10. Commercials
How to tell a story in a short space of time and how to implement notes and take account of last-minute changes to the picture.
11. Feature Films: Part 1
How to score a movie and create a memorable soundtrack that lifts the film and forges a lasting relationship with the director.
12. Feature Films: Part 2
Put film music in historic context, analyse existing film music, learn about codecs and deliverables, and practice your skills further.
13. Getting Work (Bonus Unit)
How composers are paid, royalties, finding work and building a great demo reel.
- Try before you buy -

Your course has been created by working, professional film and tv composers who know exactly what you need to know. Based in Los Angeles, London and around the world, this global faculty of award winning composers and orchestrators has come together to create a course designed to help you onto or further up the industry ladder.

Music for the Media is written and presented by working professional composers and orchestrators. Hours of show-how video tutorials with EMMY nominated composer Guy Michelmore (Avengers: Earth’s Mightiest Heroes, Lassie, Jungle Book) take you right inside the world of the commercial media music to give you the inside information to bring your career to life.
See All Teaching Staff

Music For The Media stands head and shoulders above any of those courses in terms of focus, content, scope and price. There’s zero flab and the fact that content can be downloaded and revisited is a great bonus.

I firmly believe taking the courses at ThinkSpace enormously increases your chances of breaking through that “closed-door” of the music industry, giving you “inside knowledge” that you would never otherwise find.

If you're thinking about taking the course, there are some requirements you may want to consider. Here are the most frequently asked student questions to help you to assess whether the courses is right for you.
You do not need to be able to read music to take the course, but you will need a reasonable understanding of how instruments interact with each other within the orchestra.
Yes. If your internet connection is not particularly stable, you do have the option of downloading the course materials for offline viewing. We are unable to send out physical copies of our course text and videos.
The latest Digital Audio Workstation (DAW) capable of importing video files. We would recommend:

Sample libraries are a must-have for the course. There are countless libraries to choose from, many of them capable of high-quality demos.

Here are some sample library suppliers that we recommend but there are many more:

Here is one possible selection that we would recommend:

East West Quantum Leap – Symphonic Orchestra Gold
VSL Special Edition
8Dio – Adagietto
Heavyocity – Damage
Soundiron – Emotional Piano
You will need a machine capable of handling sampled instruments and video simultaneously. We recommend at least a quad-core computer with 16GBs of RAM. The techniques are still transferable to any modern machine. As long as your processor is up to scratch, your only limit to how many instruments you can load is how much RAM you have installed.

We also recommend a MIDI keyboard, as well as monitoring headphones or speakers.
There are tens of hours of video materials created over a decade, and you can watch them in whatever sitting suits you best!
Downloadable course materials are only enabled after the money-back guarantee has either been waived or expired (30 days after purchase).
Interested? 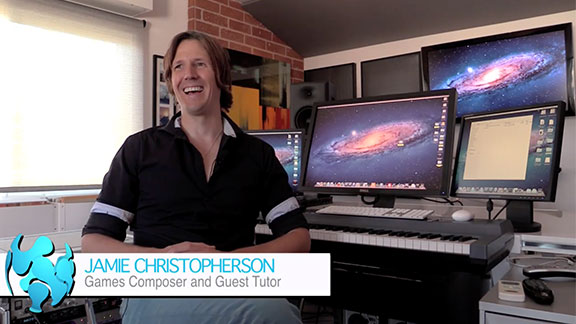 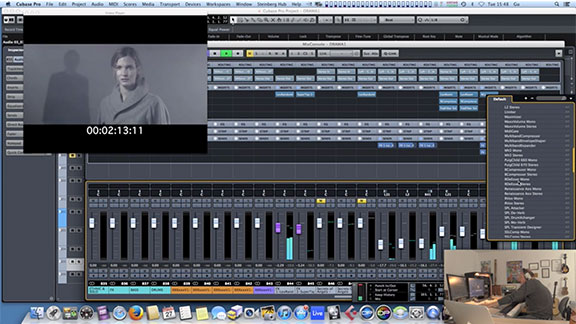 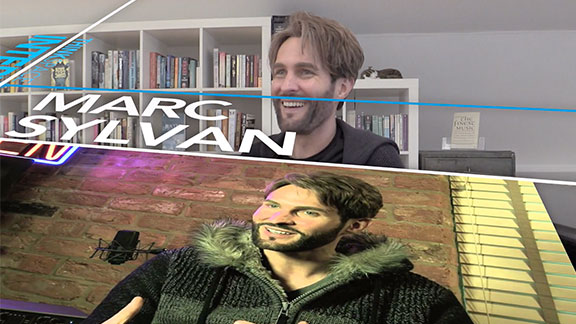 Guy Michelmore is a multi award-winning film, games and television composer whose clients include Marvel, Disney, Dreamworks, Lionsgate and dozens of major TV networks around the world. He’s best known for his work with Marvel on eight animated feature films including Ultimate Avengers and Thor, as well as hundreds of episodes of television including Avengers: Earth’s Mightiest Heroes, Iron Man: Armoured Adventures, Hulk and many more. His unique and accessible style opens up the whole process of writing music in a way that has seldom been done before.

His best known work is the music for the television game show Who Wants to Be a Millionaire? written with his father Keith, and the BBC Radio 4 World War I drama series, Home Front. He has also contributed music to film and television productions such as Extract, The Detectives, Question Time, Winning Lines, jingles for several television commercials, and scores for stage musicals.

Strachan has won twelve awards from ASCAP (American Society of Composers Authors and Publishers) and in 2012 received the ASCAP Hall of Fame Award in recognition of ten consecutive wins for the soundtrack of Who Wants to Be a Millionaire?

Marc Sylvan has forged an outstanding reputation as a composer and sound designer and is in high demand for television, commercials, film and video game projects. His many credits include the BAFTA award-winning global phenomenon The Million Pound Drop, the hit shows The Masked Singer, Pointless, All Together Now, Total Wipeout, Tipping Point and the rebooted Crystal Maze as well as an array of video game titles such as Sonic & Sega All-Stars Racing, Family Game Night and Virtua Tennis

Marc is published by Faber Music, joining a team of esteemed composers including Evelyn Glennie, Carl Davis and Howard Goodall amongst others. He is also on the Board and the Media Executive of The Ivors Academy.

Erik Desiderio has worked on more than fifty films, producing the score for the Academy Award winning film The Moon and the Son, The Immortals, and the multi Emmy award-winning series The Borgias. Television work includes composing music for Entourage, and the Primetime Emmy Awards. Video game work includes clients such as: Blizzard, Bandai Namco, Nintendo and Cartoon Network Games.

Andrew Barnabas and Paul Arnold started writing music in 1990 for games (SWIV on the Amiga for geek aware!) and worked their way up to run the music and sound department for Sony Computer Entertainment Europe before leaving in 2001, winning awards for writing music for unusual instruments, orchestras and choirs when the characters from those games were only a few pixels high! They studied orchestration, jazz harmonies and discovered a love of world music so started developing a sound that combined elements of all three.

From our quirky gothic horror soundtracks to the MediEvil series, soaring fantasy epics for Neverwinter Nights, Amsterdam and Primal, thumping high energy contemporary tracks for Forza, Sega Rally, and Green Street 3, sensitive emotional scores for dramas The Guvnors and Time Will Tell, and their love of world music which features on so many of their scores, most prominently Brink, Kung Fu Chaos and RIGS, their musical output is varied and definitely colourful.

George Fenton lives in London. He is a BASCA Fellow which makes him just one of 18 songwriters and composers to have been bestowed this huge honour. He is also a member of the Academy of Motion Picture Arts and Sciences and is a visiting professor at the Royal College of Music and the University of Nottingham.

George began to be recognised for his scoring work in the 1980s and received his first award at the BAFTAs in 1982 for ‘Best Original TV Music’ with Bergerac and The History Man. To date, George has won an impressive total of 28 awards for music composition including Baftas, Emmys, Ivor Novellos, BMIs and a Classic Brit Award, and he’s been nominated for a further 49 awards including Grammys, Academy Awards, Golden Globes and more Ivor Novellos.