Join a global community of students

The world’s first online postgraduate degree provider in music and sound-design, for film, games and television.

ThinkSpace Education is an online school that brings professional working composers, orchestrators and sound designers together with students, looking to enter the film, games and TV industries. Choose from a range of quick and affordable short courses.

Film, Games and TV
General Composition
Music Technology
Wondering which course to take? Why not check out our most popular courses – with over 12,000 students enrolled! Additionally, you can browse the complete list by visiting our course overview page. 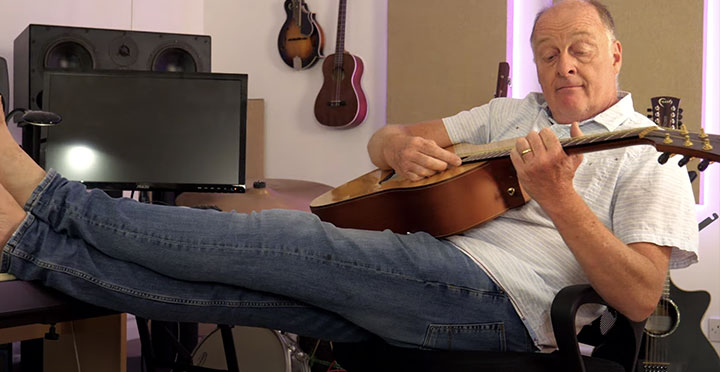 Learn Music Theory - $35
A practical, entertaining, and straightforward course in how music works and how it is written down. 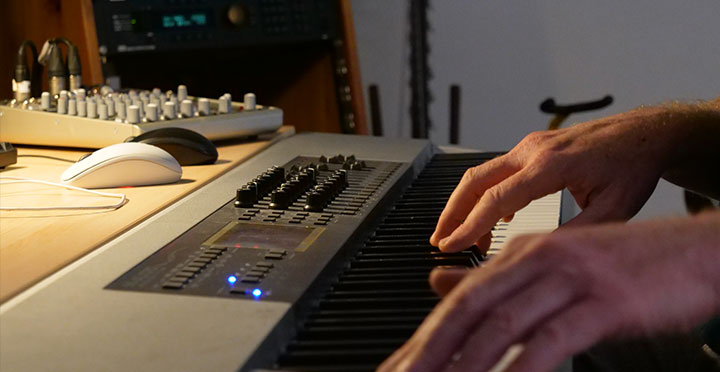 How To Write Music - $35
Learn the core processes for writing effective music. 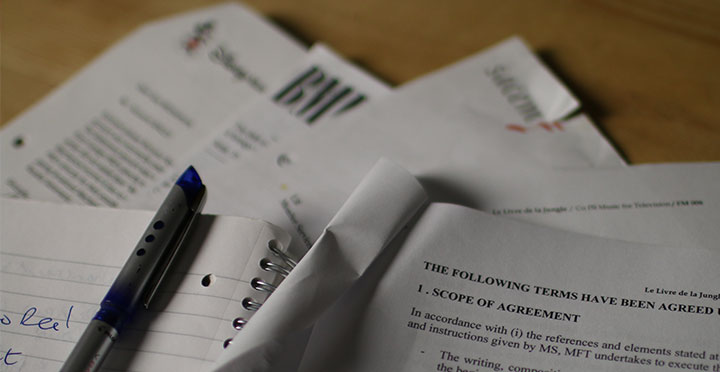 Working Composer - $249
The essential guide to making money with your music. 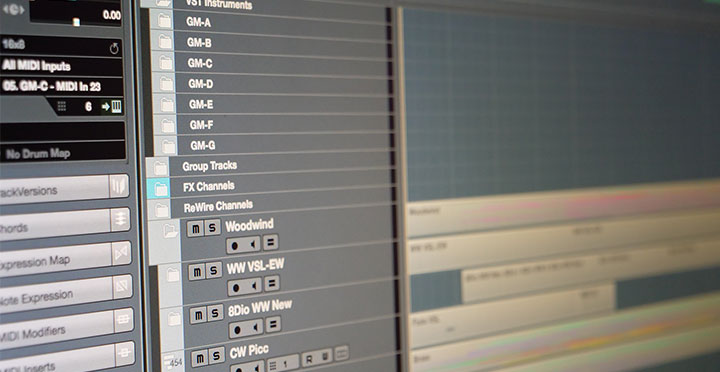 How To Score Films - $99
Everything you need to know to get up and running scoring movies.

I'm Guy Michelmore, and welcome to my YouTube channel! I compose music for film and television, and on this channel (see below) you can see me score a variety of film, television, games, and other forms of media music. I also review sample libraries and music software. Some of these videos also include tutorials on music theory and music production!

Study under composers and orchestrators working in the industry today.

All ThinkSpace courses are written and tutored by both working media composers and professionals on the cutting-edge of music research. Everyone involved is in daily contact with the sharp end of the business, providing you with practical industry training from the inside, opposed to the theoretical concepts you’ll learn at most purely academic institutions, both on and offline.

Our film scoring school has been the springboard that has helped launch many careers, some at the very top of the film and television music profession. We are uniquely connected to the world of work. Not just fellow practitioners but also real-world clients, directors and producers who tell our students what they are looking for. If you’re interested in applying for one of our postgraduate degrees, please click the button below to find out more.

Learn More
Start your composing career today with our

Have a question? We’d be happy to help. You can use the form below or you can email us at contact@thinkspaceeducation.com and one of our team will get back to you as soon as possible.

Originally from Ohio, Allison is currently a Los Angeles film composer, orchestrator, arranger, performing artist, singer/songwriter and recording musician. She graduated from Berklee College of Music with a BA of Music in Film Scoring and achieved her Master’s of Music in Composition for Screen from the Royal College of Music, London.

Past projects include score writing for television shows such as Graceland, White Collar, and First Dates, original score/orchestration for documentaries like Thank You For Your Service and Davi’s Way, score prep and orchestration for Oprah Winfrey and the Boston Pops, commercial music for Ozarka and Poland Springs, and gaming music, songwriting, and voiceover for Square Panda Letter Lullaby. As a recording musician, Allison has recorded with Burl Audio at The Village, East West Studios, and Woodshed Studio and has worked with 4 time Grammy award-winning producer Rob Carranza as well as Grammy award-winning producer Matt Champlin amongst countless other studio projects.

Charles Fernandez is an Emmy and Annie Nominated composer, as well as an orchestrator, bassoonist, educator and conductor, who has been working in Los Angeles since 1983. He has composed for television series’ such as Disney's Little Mermaid, Disney's Aladdin, Universal's Casper Cartoon Series (for which he  received two Emmy and one Annie Nomination), Disney's Doug,  Disney's 101 Dalmatians, DreamWorks' Toonsylvania, Disney's Bonkers  and Adult Swim's Robot Chicken.

Among films he's written for are Doug's 1st Movie, Aladdin III, The Pebble and the Penguin, All Dog's Go To Heaven II, Aladdin and the King of Thieves, All Dogs Christmas Carol, Babes in Toyland, Tom Sawyer, Alvin and the Chipmunks Meet Frankenstein, The New Adventures of Tom Thumb and Thumbelina, Jingle Bells and The Tangerine Bear.

As a teacher, he’s an instructor at LACSHA (Los Angeles County High School of the Arts), UCLA Extension and for ThinkSpace Education, based in the UK.   His recent concert premieres include: Frolic Concertino for Tuba and Concert Band, Persepolis Bazaar for Concert Band, Holiday Horn Concerto for Horn and Band/Orchestra, For the Matadors for the 50th anniversary of CSUN, Americana Trio for Flute, Clarinet and Bassoon, Cruise and Star for Saxophone Sextet and Harp, and the latest commission for Dr Larry Stoffel and CSUN, Bachus Illatus for Band and Organ for the Los Angeles Bach Festival.   He’s also served as orchestrator and conductor on countless trailers and film projects, the most recent of which was the trailer for the James Bond film Spectre.

Gina Zdanowicz is an Emmy-Nominated sound designer and music composer for games, film and TV. Her love for video games, sound and technology began at a very early age and grew into a decade-long career in the games industry. After graduating from Berklee College of Music with a degree in music synthesis, Gina focused on a career in game audio working in-house for developers as well as operating her own independent sound studio, Serial Lab Studios. Her work can be heard on over 100 game titles from award-winning AAA to casual such as Just Cause 3, Paladins, Bioshock 2, The Bureau: XCOM Declassified, Runewards, and Cartoon Network to name a few. In addition to being a sound designer and composer, Gina is a course author, instructor, lecturer and tutor.

Additionally, he has written a number of works for concert performance including pieces for various small chamber ensembles, chamber orchestra, wind ensemble, concert band and percussion solo. Bill was a 1994 recipient of the BMI Pete Carpenter Memorial Fellowship, which included a seven-week internship with television music composer Mike Post.

“What Guy has established/maintained here is something quite remarkable and unique, with he, Tim, Bradley, TSE staff and tutors all working toward a singular, focused goal, namely, to equip the dedicated TSE student with the tools he/she needs to succeed as a working commercial music professional. To say that I wished I had this type of musical training available to me when I was starting out would be the understatement of the century.”

Lindsay is a versatile and innovative composer writing music for film, TV, games & advertising. Her work has screened across the globe in competition at numerous festivals and has been broadcast worldwide for the likes of BBC, Channel 4, Netflix and Sky, amongst others.

Erik Desiderio is an award-winning composer. He has worked on more than fifty films, including ten features. He produced the score for the Academy Award-winning film The Moon and the Son and helped produce the score for Immortals, featuring Mickey Rourke, and the multi Emmy-Award winning series The Borgias. Festival highlights include films that have been in the Sundance, Tribeca, and Toronto film festivals. Some of his television work includes composing music for Entourage, and the Primetime Emmy Awards. He is also a recipient of a Global Music Award of Excellence for his work on The Four Players, the Clive Davis Award for Excellence in Music and the Best Original Score Award at the First Run Film Festival in New York. Video Game work includes music for Diablo III: Rise of the Necromancer for Blizzard Entertainment. Other game clients include Bandai, Namco, Zynga, Kabam, Tapzen, Nintendo and Cartoon Network Games. Commercial clients include Nintendo, Samsung, Kellogg’s, Coffee-mate, Heineken and many others.